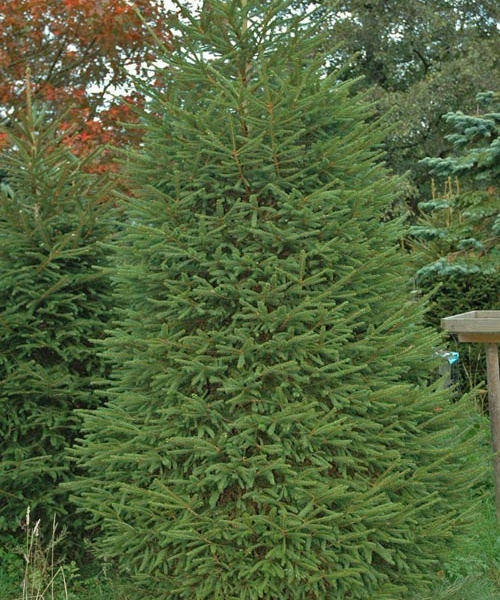 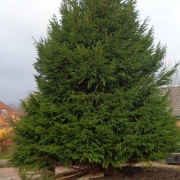 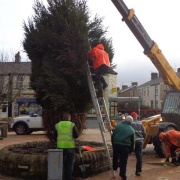 The Christmas Tree that kick-started Christmas trees in Britain.

The Norway Spruce, and the great fun we have in decorating Christmas trees every year, all began in 1841. Prince Albert, husband of Queen Victoria introduced the German custom of decorating a spruce tree with lights. Since then, the craze has caught on after the Queen showed off her decorated Christmas tree and it quickly spread throughout the rest of Europe.

It is an extremely beautiful tree, and is the same one that is given to London to serve as the Trafalgar Square Christmas Tree, as well as Washington D.C and Edinburgh, by the city of Oslo every year since 1947. The tree is decorated in an traditional Norwegian style and bears a plaque that says:

“This tree is given by the city of Oslo as a token of Norwegian gratitude to the people of London for their assistance during the years 1940-45.

The Norway Spruce is about as European as it gets. Naturally it grows in Scandinavia, Western Russia and the Baltic States, the Alpine and the Carpathian mountain ranges as well as within the territories of the Czech Republic, Poland and the Balkans. Today it is found all throughout central and western Europe, going as far south as the Pyrenees in Northern Spain to all of the British Isles and as far east as the Ural Mountains. The tree grows exceptionally well in almost all soils, as long as they are not exceptionally dry. It also grows very fast, up to 1 metre per year for the first 25 years.

Today, the Norway Spruce is mainly used for timber and paper production, although historically it was also used for the creation of spruce beer. Spruce beer was first adopted by the French Navy when venturing into Canada, and later it was picked up by the British Royal Navy to serve as a drink to cure and prevent scurvy, all thanks to the high vitamin C content of the Norway Spruce needles from which it is made.

The Norway Spruce is also the oldest living tree in Europe. In Sweden, a Norway Spruce has been carbon dated as far back as 9,560 years old. It is still alive thanks to the fact that it clones itself. The visible tree only lives for about 600 years, however its’ roots don’t die, instead they sprout a new tree. The oldest roots indicate that it first sprouted around 7550 BC, for comparison, the invention of writing did not occur until around 4000 BC. Researchers found 20 more Norway Spruces around the same area that are all over 8000 years old. Leif Kullman, the man who discovered the tree, called it Old Tjikko in honour of his late dog.

There are no reviews yet.

Be the first to review “Trees – Norway Spruce” Cancel reply